A veteran optician has been suspended after he mistook a female patient practising yoga moves in his store for flirting.

The sports enthusiast tilted her head down and bent forward when trying on her new glasses to make sure they stayed on when she performed the exercises.

But John Snelgrove claimed he believed the woman was carrying out a move he thought was called ‘dirty dog’ and was wiggling her bottom in a ‘provocative’ way to ‘get my interest’.

The 64-year-old even said he thought she was ‘simulating oral sex’ as she bent over with an open mouth, and that her skirt rode up and ‘left little to the imagination’.

That evening Snelgrove, based in St Albans, Hertfordshire, texted the unnamed healthcare professional to ask her if she was ‘interested in taking it further’ and the ‘shocked’ woman told him ‘no’.

Two days later the woman named only as ‘Patient A’ had to make an ‘uneasy’ return to his shop, Enhanced Optical Services, to collect her glasses, then complained.

Snelgrove, who did not apologise to her, later said he ‘realised that he had mistakenly taken Patient A’s behaviour as an invitation for him to approach her and that as a man of advancing years he was taken aback and flattered by his mistaken belief Patient A was interested in him’. 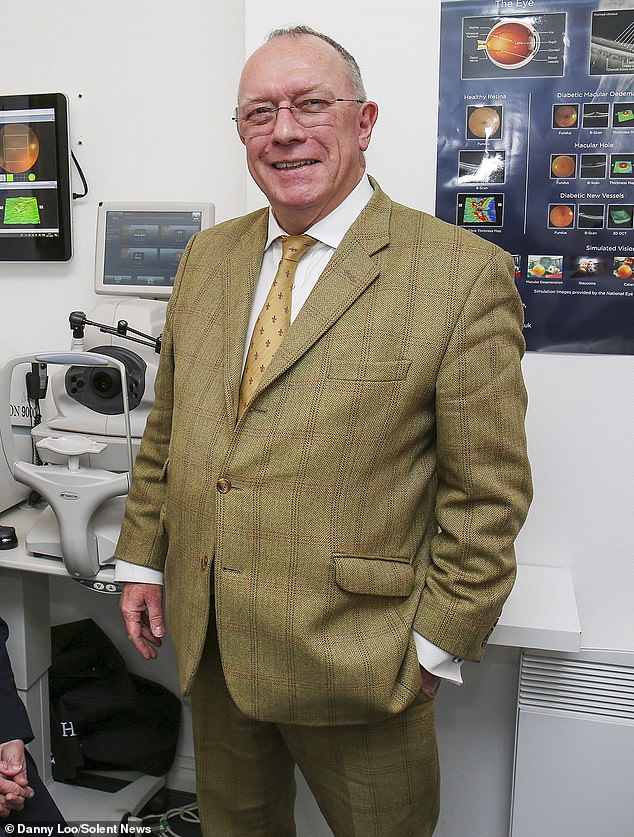 Now, at a General Optical Council [GOC] tribunal, Snelgrove has been suspended for six months.

The tribunal heard Patient A visited his store in April 2021 to buy two pairs of glasses then returned days later to try one pair on when they were ready to collect.

A tribunal report said: ‘She said she had told Snelgrove that she wanted to check if the frames would remain on when she engaged in sport and yoga and therefore tested them out by tilting her head forward in a repetitive motion and inclining or “inverting” her body.’

But, Snelgrove, who qualified in 1979, claimed on her previous visits she had been ‘flirtatious and over friendly’ as he chatted to her about how he was planning to ‘stay at home alone drinking Jack Daniel’s’.

Snelgrove alleged the woman, when trying on glasses, ‘bent over from the waist vigorously shaking her head in many different directions while rotating her body in what he considered to be a provocative manner’.

He claimed she was ‘wiggling her posterior in a manner that he considered highly unusual’.

The report said: ‘He claimed that when she first bent down towards him, she was moving her head up and down with her mouth open in what he considered was a simulation of oral sex.

‘He said that when she moved in front of the door to the practice and had her back to him, she was “oscillating her posterior” in what he interpreted as an attempt to “get my interest”. 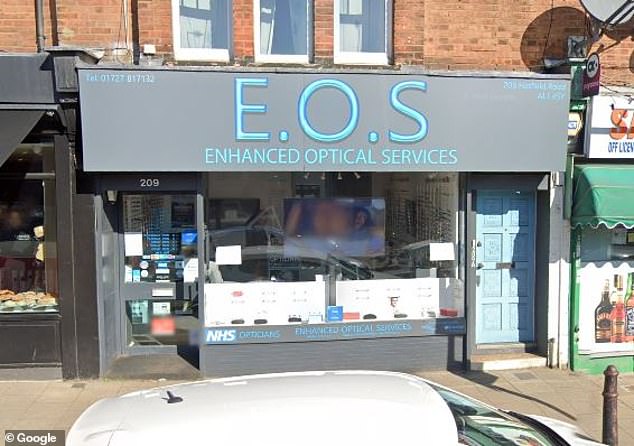 Two days later the woman named only as ‘Patient A’ had to make an ‘uneasy’ return to his shop, Enhanced Optical Services (pictured), to collect her glasses, then complained

‘[He claimed it was in a] provocative manner that caused her skirt to ride up [and] “left little to the imagination”.

‘He described Patient A’s movements as “provocative” and “lewd”. He said he had never seen anything like it in all his years and had been taken aback and stunned.’

He texted the woman: ‘Forgive me for asking, I don’t want to embarrass me or you at our next meeting when you collect your specs.

She replied ‘no thank you’ and Snelgrove said ‘Ok thanks… I hope you don’t mind me asking.’

The tribunal heard that Patient A ‘strongly denied’ Snelgrove’s interpretation of events and ruled it happened as she described.

She was ‘quite shocked by what had happened and uncomfortable that her personal data had been used for non-business purposes’ and said at the next appointment ‘I tried not to make eye contact or have any further discussion on this topic’.

Snelgrove, who had also described the woman’s behaviour as ‘totally outrageous’, said he took a course to learn about professional boundaries.

He said ‘it made him more aware of the potential to overstep the mark in this day and age’.

However, the tribunal ruled his thinking is still ‘distorted’ as he still believes her behaviour ‘contributed to what happened’.

Tribunal chair Sara Fenoughty said: ‘The committee considered that Snelgrove’s use of Patient A’s personal data to make his initial approach to her was self-evidently extremely serious.

‘It considered this to be the most serious aspect of his behaviour.

‘However, it was also satisfied that all the facts found proven, including Snelgrove subsequently failing to apologise, trying to make light of his behaviour and giving Patient A the impression he had been led on, were part of an ongoing course of extremely troubling conduct.

‘He was an experienced professional and should have been well aware that what he was doing was an unacceptable breach of professional boundaries.

‘He continued to hold Patient A in some way responsible for his own misconduct.

‘He failed to show any meaningful understanding of how distressing and unnerving his actions would have been for Patient A.’